Jewish-American businessman and real estate tycoon Gary Barnett purchased the land from Nayot Komemiyut for NIS 750 million, almost five times the price that was paid in 2016 to the Greek Orthodox Church. KKL-JNF is currently leasing the land, but this is only until 2051, leading to growing concern among the residents for their future. In an “open letter” to Barnett, the residents wrote:  “You have not just bought real estate. You have bought the lives and properties of thousands of Jerusalem residents. We are not tradable merchandise.”

Six years after they were first informed of the sale of the land on which their homes stand, from the Greek Orthodox Patriarchate to a private company, thousands of central Jerusalem residents were shocked to discover that the trading of land continues, and even intensifies. This was when American real estate company Extell, owned by Jewish-American businessman and real estate developer Gary Barnett, announced that it had purchased the land for 750 million NIS, equivalent to roughly $219 million in U.S. dollars, from Nayot Komemiyut  Investments, the company that purchased the land from the church in 2016.

The complex acquired, approximately 500 dunams of land, is located in the most sought-after area in central Jerusalem which spans the neighborhoods of Talbieh, Nayot, and Valley of the Cross and includes about 1,000 housing units, as well as several hotels, including the five-star Inbal Hotel, public buildings and institutions, and more than a dozen undeveloped plots. Nayot Komemiyut, the private consortium of investors led by the Ben David Group, recently decided to sell the land following internal disputes between its partners. Nevertheless, the transaction reflects a huge profit — the purchase price of the land in 2016 was around NIS 160 million, so this deal reflects a more than 4.5 times increase in the price of land within a few years.

The story began in 2017 with an outbreak of public uproar, when it was publicized that a group of businessmen, led by Attorney Noam Ben David, had purchased the lands of the Greek Orthodox Patriarchate in the center of Jerusalem a year earlier. In the early years of the state, Keren Kayemeth Le’Israel, otherwise known as the Jewish National Fund ( KKL-JNF) signed lease agreements with the church regarding three complexes for a period of 99 years.

According to the agreement, upon the expiration of the agreements in 2051 and 2052, KKL-JNF has the option to extend the lease for an additional 49 years, based on the market value, against an additional payment. As the end of the leases approached, unsuccessful attempts were made to acquire permanent ownership of the land by KKL-JNF, and the publication of the transaction for the sale of the land by the church to a private company, therefore, caused a great shock among apartment owners. While residents own their apartments they do not own the land on which their homes are built and thus they fear that they will be forced to leave their homes or repurchase the land when the lease expires. This complex real estate situation has caused property prices in the area to plunge, to the point of a 40%-50% devaluation.

About two months ago, there was a seemingly positive turnaround when, on behalf of Himnota, the real estate arm of KKL-JNF, an announcement was issued stating that it is currently working to extend the leases on the land vis-à-vis Komemiyut for a period of several additional generations, that is, more than 99 years as stipulated by the current lease agreements that are expected to terminate in 2051-52.

However, as of this time, the statement remains a mere statement without any practical action backing it up. Thousands of residents were shocked to discover that the developers were not waiting for KKL-JNF, and had already traded their rights to a third party – the American real estate company Extell. Extell was founded by Barnett in 1989 and has a current portfolio of assets in New York covering more than 25 million square feet of space across past and future developments. Following the deal, Barnett’s representatives provided a statement on his behalf to the Israeli media projecting their enthusiasm and optimism for the deal.

The deal is a win-win-win-win situation for the state of Israel, for the city of Jerusalem, for Extell, and for the residents. We have great reputation with complexed projects in the US, including the Belnord Project on UWS NYC, which has over 200 tenants in complexed situations. We are going to treat the tenants in Jerusalem with the same respect and fairness as we are doing in all of our Projects. The project will strengthen Extell’s ties with the Israeli market and accelerate the development of the center of Jerusalem.

However, the residents of the complex purchased by Barnett are not enthralled by the deal, which exacerbates the uncertainty in which they find themselves, and leaves them asking what will happen to the land when the lease expires in less than thirty years. Upon hearing the news, they published an “open letter” to Barnett, via the media.

It seems, that despite recent KKL-JNF declarations, the issue is far from resolved, and it is possible that the problem has even worsened. While Barnett, a 67-year-old orthodox Zionist Jewish businessman is unknown in the local Israeli real estate world, the huge sum he paid for the land indicates that he has serious motivations for making the purchase. But the question that is being asked now is whether KKL-JNF, which missed the opportunity to resolve the issue vis-à-vis the church at a relatively low price and was also unsuccessful in reaching an agreement with Nayot Komemiyut, will be able to act on the issue in a more effective manner with Barnett.

Related Articles
Investment Insights Rebuilding Jerusalem speedily in our days: The capital’s population is expected to reach 1.5 million within twenty years
Market News After record-breaking growth in the past decade, there’s no stopping Ramat Beit Shemesh 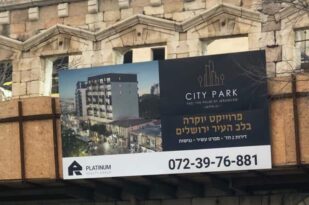