After a freeze of several years, the Jerusalem Municipality is once again pushing a plan to build 9,000 apartments for Haredi residents in the east of the city, in the area of the former ​​Atarot Airport. If approved, the plan would provoke strong international opposition, due to its proximity to many Palestinian neighborhoods. In the meantime, the State has put off making a decision on the issue for at least a year, explaining that they must first determine the environmental impact of the plan. Simultaneously, the Minister of Transportation is examining the possibility of reactivating the airport as a joint Israeli-Palestinian airport.

A plan to build a new Haredi neighborhood in the area of ​​the abandoned Atarot Airport in East Jerusalem is currently underway. As expected, it is causing quite a bit of political tension, receiving opposition from both right-wing and left-wing parties in the government. The Local Planning and Construction Committee of the Jerusalem Municipality approved the plan about two weeks ago. It includes 9,000 residential apartment buildings, as well as commercial centers and hotels, in an area of about ​​1.2 square kilometers. However, at a hearing on December 6, the District Planning and Building Commission, which has the authority to grant final approval for the plan, decided to accept the requirements of the Ministries of Health and Environmental Protection to conduct an environmental impact review before approving the plan. This is expected to postpone the process by at least a year

Buying time for a controversial plan

The plan to build a new Haredi neighborhood on the grounds of Atarot Airport is not new. In fact, it has been around for many years, but it has never moved forward, mainly due to geopolitical considerations. This is one of the largest construction plans ever promoted in the eastern part of the city – located in the heart of Palestinian population centers – and its approval is expected to lead to tensions with the US administration. Some Israeli journalists reported that the alleged need for an environmental impact survey is really just a convenient coverup for the diplomatic considerations. Meanwhile, according to press reports, Israeli officials have made it clear to the US administration that Israel has not yet decided whether or not to advance the plan and assured them that this will only be brought to the decision of the government in a year from now.

The history of the site

Atarot Airport was established during the 1920s by the British Mandate, mainly to serve senior British officials. It was built on land belonging to the nearby Jewish moshav of Atarot, which is where it got its name. In the years following the War of Independence, the airport was developed and expanded significantly under Jordanian rule. In the 1960s, it became an international airport serving tourists from Europe and Arab countries who wanted to travel to the holy sites of Jerusalem and the surrounding area. After the Six-Day War, the airport came under Israeli control, and it continued to be used for domestic flights. Despite extensive renovations in 1972 with the goal of preparing the airport for international flights, this never happened because of international opposition. With the outbreak of the Al-Aqsa Intifada in 2000, all of the airport operations were halted due to security considerations.

As expected, the plan has provoked much criticism among left-wing organizations, who have put pressure on the left-wing and centrist parties in the government to make sure it does not move forward. Following the approval of the plan by the Jerusalem Municipality, Peace Now sent a letter to Knesset members of the Meretz, Labor, and Yesh Atid parties, warning that the plan undermines the chances of implementing a two-state solution in the future.

In the last few days, the left-wing parties have suggested the possibility of once again using the area for its original purpose – an airport – which will serve both Israeli citizens and the Palestinian population. This plan was initiated by the Minister of Regional Cooperation, Issawi Frej of Meretz. Minister of Transport, Merav Michaeli of the Labor Party, has announced that she is examining this possibility.

In this context, it should be noted that the decision to build a second large international airport in Israel has been delayed for many years, despite the fact that Ben Gurion Airport in Lod is already very close to its maximum capacity threshold.

Frej explained the initiative in a statement: “As the decision on the location of Israel’s additional airport continues to be delayed, the existing resource of a ready-made airport in Atarot must be utilized and reopened as a joint Israeli-Palestinian airport. The renovation and reopening of this airport will address both the aviation needs of the Jerusalem metropolitan area, as well as the needs of the residents of the Palestinian Authority for an entry and exit gate via the air.”

Another interesting issue related to the plan is that the new neighborhood is planned by the Jerusalem municipality specifically for the ultra-Orthodox public. This is after many years in which the municipality refrained from promoting specific programs for this sector, for fear of accelerating the “Haredisation” Jerusalem, a process that the municipality has tried to prevent in recent years.

In general, the issue of housing for the ultra-Orthodox public is considered one of the most explosive issues in Israel real estate and housing policy. In most cases, non-Haredi populations are not interested in living in localities with a large proportion of Haredim, both for fear that Haredi lifestyles, such as modest clothing and a ban on traveling on Shabbat will be imposed on them, and because the Haredi sector is generally a low-income population. The establishment of separate cities for the ultra-Orthodox, such as Bnei Brak, Elad, Modi’in Elite, and Betar Elite, is also not optimal, as it makes it difficult for the ultra-Orthodox workforce to integrate into the labor market — an interest that the state seeks to encourage. 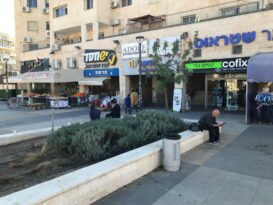 Housing Policy Where can we build 200,000 apartments for the ultra-Orthodox sector?