Israel’s high real estate prices make the “vacation home” that is common in some Western countries rare among Israelis. However, more and more foreign residents are buying vacation apartments in Israel, often as the first step toward Aliyah or retirement. The most common locations for vacation apartments in Israel are Jerusalem, Tel Aviv, and Eilat, followed by other coastal cities. This is the second article in a Buyitinisrael series about vacation homes in Israel.

In many countries around the world, it is not uncommon for middle-class people to own a holiday home that is used mainly during the summer. In Israel, where real estate prices are among the highest in the world, owning a second property that is used for just a few weeks during the year is quite rare. However, every year, several thousand foreign residents living abroad purchase apartments in Israel – many of them as vacation homes.

In the first article in the series, we looked at the private villas purchased in Israel as vacation homes. Now, we will survey the scene for foreign residents interested in purchasing an apartment in a residential building for vacation purposes. Interested buyers can usually be split into two main types: those dreaming of an apartment in Jerusalem to spend the Jewish holidays in the holiest place in the world, and those who want to spend their vacations on Israel’s long and beautiful Mediterranean coastline.

Over the last decade, Israel’s capital city has become a very popular destination for thousands of people living abroad who want a holiday home in the Holy Land. Most owners do not visit much throughout the year, showing up mainly during Jewish holidays and vacations. Naturally, the vast majority of these buyers are religious. The city has several particularly popular hotspots among foreign residents.

Mamilla – An upscale neighborhood adjacent to the walls of the Old City with a large number of luxury projects aimed at ultra-Orthodox and religious audiences. Prices range from NIS 5-10 million for a 130-200 square meter apartment.

City Center – Includes two main areas that have become popular destinations for foreign buyers: HaNevi’im Street, with projects that offer a great view of the Old City, and the Mahane Yehuda marketplace complex, which has changed rapidly in recent years, from an old, traditional market to an upscale, bourgeois area. Apartments in these areas are sold for about NIS 40,000-50,000 per square meter.

While Jerusalem may be the spiritual center of the Jewish world, Tel Aviv is the State of Israel’s commercial, cultural, and economic center, overflowing with restaurants, shops, museums, and theaters, not to mention a long stretch of beautiful beaches. Real estate prices are not only the highest in the country, but Tel Aviv is considered one of the most expensive cities in the world.

The Promenade and Herbert Samuel Street – The “Golden Mile” of the Israeli apartment market, which combines downtown living with proximity to the beach. The area has become popular in recent years among many of the world’s richest people, with property prices reaching upwards of tens of millions of shekels. Just one street further from the coast, it is still possible to find spacious apartments for “just” NIS 5-10 million.

Rothschild Boulevard and Habima Theater Square – The beating heart of the city, and one of Israel’s hottest areas for entertainment, culture, and shopping. The boulevard boasts many buildings built in the Bauhaus architectural style that prompted UNESCO to declare Tel Aviv a World Heritage Site. In this prestigious area, second-hand apartments are sold for NIS 45,000-50,000 per square meter, while new apartments go for NIS 50,000-60,000 per square meter.

Hagush Hagadol/The Great Bloc – An upscale neighborhood built in recent years in the northern suburbs of Tel Aviv, characterized by spacious, luxurious apartments near the beach. Prices start at NIS 3 million for a 3-room apartment, going up to NIS 7-8 million for penthouse apartments.

Netanya has a long beachside promenade with many hotels and restaurants. In the last decade, a number of luxury residential towers have been built along this strip, offering residents both a view of the Mediterranean Sea and the bustling urban life that Netanya offers – especially during July and August, when it fills up with tourists. Properties in the area are priced at NIS 30,000-40,000 per square meter, depending on which floor the apartment is on, when it was built, and more.

Ir Yamim – A new neighborhood of luxury towers on Netanya’s southern coastal strip, which quickly became one of the city’s most upscale neighborhoods. However, the prices in this area are slightly cheaper than the central promenade, averaging at about NIS 3 million for a 5-room apartment of 130-140 square meters.

A city in Israel with a long strip of coastline, just south of Tel Aviv. Bat Yam is a rather dull place, with little to do within the city itself. However, its beachfront strip is beautiful, and apartments here go for less than half the price of those in Tel Aviv, while the entertainment centers of the big city are just a short bus or taxi ride away. In the Park Hayam neighborhood, adjacent to the beach, 5-room apartments cost about NIS 3 million and 4-room apartments go for approximately NIS 2.5 million.

The southern coastal city has in recent years become a favorite destination for foreign buyers. Ashdod has several popular areas, the most prominent of which is the seaside marina district, full of restaurants and cafes. The price of 3-room apartments is about NIS 2 million, a 5-room apartment goes for about NIS 2.5 million, and luxurious penthouses are sold for NIS 4 million or more.

Vacation apartments in Israel are not cheap, especially since, by definition, they must be in prime locations, such as downtown Jerusalem and Tel Aviv or right on the beach. However, those who can compromise on coastal cities outside the center of the country – going as far as Nahariya in the north or Ashkelon in the south – can find great options for around NIS 1.5 million. Those who can afford to buy an apartment in Jerusalem or Tel Aviv will get a vacation property in one of the most interesting cities in the world, where, as we have seen over the last few decades, apartment prices are always on the rise.

It is important to note that the past year has not been a routine year when it comes to purchasing vacation apartments in Israel by non-residents. The Corona epidemic, and the the subsequent closure of borders and restriction of flights, did not allow many potential buyers to come to Israel to get a close look at the options. However, the new government is examining various options for a careful opening of the skies, and it is possible that by August 1 tourists will be allowed to enter Israel. In any event, the purchase process can always be started remotely, and sometimes entire transactions are even made from start to finish while the buyer is not present in the country and is represented by a lawyer with power of attorney. 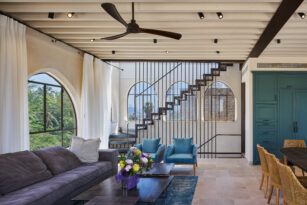 Market News At home in Jerusalem — the beating heart of the Jewish people
Market News Are American buyers flooding Tel Aviv’s property market?
Tips & Trends What types of homes in Israel are available to buy?
Law & Taxation In an attempt to stop the surge in house prices, exemption of capital gains tax for foreign residents to be canceled
Market News Rising prices for real estate in Netanya far exceeded the national average in 2021
Trending
Advertisement
Advertisement
Advertisement
Calculate the Tax