During 2021-2022, the country’s population grew by 174,000 people, constituting a rate of 1.8%, about 50,000 of whom were new immigrants, and currently stands at 9.6 million people. Jerusalem leads the list of cities with negative net migration, and surprisingly this year Tel Aviv is also on the list. There are 2.77 million households in Israel, spending an average of about NIS 16,000 a month, 25% of them are on a low income. New Year’s Eve 5783 – this is the State of Israel in numbers.

On New Year’s Eve, 5783, Israel’s population is approximately 9.587 million. Approximately 7.07 million (74%) are Jews, 2.02 million (21%) are Arabs, and another half a million (5%) are members of other ethnic groups. This is evident from a series of data published by the Central Bureau of Statistics (CBS) ahead of the Jewish New Year. According to CBS estimates,  the country’s population is expected to reach 10 million residents in about two years from now, by the end of 2024, and 15 million by the end of 2048.

In total, the country’s population increased by 174,000 during 2021-2022, reflecting a growth rate of 1.8%. Roughly 180,000 babies were born, 50,000 people died, and 51,000 people immigrated to Israel, of whom 49,000 are new immigrants. This represents a higher growth rate than that recorded a year earlier, which stood at 1.6%. This figure is considered exceptionally low, mainly due to the small number of immigrants during the Covid-19 pandemic, and also due to the increase in the mortality rate, for the same reason.

The number of households across Israel is 2.77 million, and the average number of persons per household is 3.23. This year, 64.6% of households lived in an apartment they owned, and 37.6% of those living in apartments they owned paid a mortgage. The average total expenditure per household per month is about NIS 16,000 per month, of which 25% is on average on housing. This is the highest item of expenditure when by comparison only 17.6% of the expenditure is on food.

In fifth place in the negative migration calculation was surprisingly the city of Tel Aviv-Yafo. Although about 21,000 people emigrated to the city, which is considered the most sought-after in Israel, close to 24,000 people also left it. So in total, the negative migration balance stands at 2,900 people. It seems that the main explanation for the massive movement of residents out of the city is the skyrocketing prices of apartments and rental prices,  which made life in the city economically impossible for anyone who does not fit into one of the top two income deciles.

The positive migration trend was led in 2021 by the new city of Harish, near Hadera, which continues to be rapidly populated and crossed the 30,000-resident limit this year. About 7,770 people made their homes there in 2021, compared to only about 1,250 people who left the country. In total, the balance of immigration to the city was about 6,500 people. In second place in the positive migration comparison is Beit Shemesh, with 7,700 people emigrating to it compared to about 3,700 people who left it, and in total, the net migration was about 4,000 people. The first five are completed by Yavne (positive balance of 2,900 people), Herzliya (2,800 people) and, Rosh Ha’Ayin (2,500 people).

As we usher in the new year 5783, it is hoped that the status of the capital of Israel will change, that it will become an attractive residential destination for all sectors of the population, and that it will be able to provide its residents, who currently meet a  socioeconomic level of 3 out of 10, with an excellent quality of life that will be maintained and strengthened. 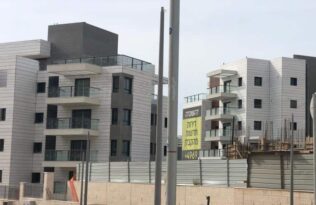