The Jewish New Year started off with a burning hot real estate market, rapidly rising prices, and a general sense of chaos. However, from new taxes for real estate investors to increased assistance for first-time home buyers, and lowering hurdles in the planning process, change is on the horizon over the course of the year. Buyitinisrael presents a look at what 5782 will bring to the residential real estate market.

Earlier this month, Jews in Israel and around the world celebrated the high holidays, ushering in the New Year – 5782, on the Hebrew calendar. In comparison to the last two years, the holidays were celebrated during a period where the Israeli government is actually functioning. Despite hiccups and disagreements, as of now, there is at least someone appointed with the task of navigating the complex and ramified system that is Israel’s housing market.

When looking ahead to what the Israel real estate market may look like in the coming year, it is easier to start with what we know it will not look like. First things first, the wildly high real estate prices are expected to start coming down. The sharp rise in prices over the past few months is largely the result of two years with no clear policy. This reality is likely to end, as the government simply cannot afford the severe social crisis that will ultimately arise when the overwhelming majority of the population is unable to purchase an apartment.

When it comes to what changes we can expect to see in the coming year, the answer is more complex. Of course, no one can say for sure, but there are many new policies that have already been announced by government officials, some of which are already in the early stages of implementation. In the following article, we have summarized the major changes that Buyitinisrael expects to see in Israel’s residential real estate market in the coming year.

This is not yet a fact, but rather a prediction that has a very high chance of coming to fruition. In interviews conducted before Rosh Hashanah with the General Director of the Ministry of Finance, Ram Blinkov said, “I would not buy an apartment for investment now.” Although a new policy has not been explicitly stated, market estimates suggest that the Ministry of Finance intends to raise taxes for real estate investors in the near future.

The government wants to put an end to the dizzying pace at which real estate prices have skyrocketed in the last few months – at a rate of more than 10% a year. The only method that has proven itself as a surefire way to curb apartment prices in recent years is increasing the tax burden on buyers – specifically those buying properties for investment purposes. Former Minister of Finance, Moshe Kahlon, made many policy changes to bring down housing prices over the course of his tenure from 2015-2020, but increasing the purchase tax on real estate investors was by far the most successful.

While the details of the policy changes have not yet been decided, it is clear that the government does not intend to let the market continue to operate as it has been until now, and no other methods have made such a quick and effective impact on the market.

2. Benefits for young couples – but less than before

Shortly after taking office, Minister of Housing and Construction Ze’ev Elkin announced that he intends to renew the Target Price (Mechir Matara) program for subsidized housing. This plan would replace the Reduced Price (Mechir Mufchat) program initiated by his predecessor, Ya’akov Litzman, which operated at an extremely limited scope. The main government program subsidizing housing for first-time home buyers over the past six years has been the Buyer’s Price (Mechir leMishtaken) program.

The Target Price program is similar to Buyer’s Price, as both provide discounts to first-time home buyers who meet certain criteria laid out by the Ministry of Housing. However, there are also significant differences between the two programs, starting with the amount of the subsidies provided. In the renewed Target Price program, apartments will be sold at 20% of the market price, up to a maximum of NIS 300,000. The Buyer’s Price program, however, granted discounts of close to NIS 1 million in areas of high demand, such as Herzliya.

Another significant difference between the two programs concerns the areas of implementation. While Buyer’s Price operated throughout the country, Target Price is limited to municipalities where the average price per square meter is NIS 23.4 thousand, excluding Modi’in and most of the sought-after cities in Gush Dan from the program.

In conclusion, while the government will return to a policy of assisting young couples in purchasing their first apartment in the coming year, it will be on a much more modest scale than the previous Buyer’s Price program offered.

In early September, the Knesset plenum approved the first reading of the latest Arrangements Law, which details the major policy reforms required to implement the State budget. Among these is the self-licensing reform, a long-awaited policy change that the industry hopes will help shorten the process of issuing building permits, one of the most challenging and time-consuming bureaucratic hurdles faced by the industry.

Up until now, the local authorities have been responsible for this stage of the process. Municipal employees must approve each plan, checking that the application submitted complies with the approved construction plan. This process can go on for months, due to a shortage of manpower, conflicting and erroneous interpretations of the plan, and other complicating factors.

A revolutionary reform gives architects the authority to issue building permits directly to the applicant, such as the developer. The architect must ensure that the construction in the field complies with the plans approved in the building permit. If this reform proves to be successful, it has the potential to significantly reduce the time and bureaucracy required to move from getting approval for building plans to beginning construction.

Israel’s most effective urban renewal program thus far, known as Tama 38, is due to expire in October 2022. Last July, Minister of Interior Ayelet Shaked revealed the details of a potential replacement plan, putting an end to a long period of uncertainty.

Similar to Tama 38, Shaked’s proposed plan refers to upgrading a single building or a small group of 2-3 buildings, as opposed to demolition-construction (pinui-binui) projects that apply to extensive complexes. Shaked’s main goal was to encourage municipalities to promote more urban renewal plans, after many stopped approving them altogether. To provide incentive, the plan allows local authorities to levy an improvement tax, expropriate part of the new construction for public needs, and more.

Shaked has stated that if the plan does not receive final approval by November, she will work to extend Tama 38 instead. However, known as a “bulldozer” in the Knesset, there is a high chance that she will succeed in getting approval for her plan. As is to be expected with the implementation of any reform, the market will likely require a lengthy adjustment period, which may temporarily slow down the pace of issuing permits.

5. Private car owners will lose out

The Tel Aviv-Yafo Municipality recently approved a revolutionary parking standard for new residential construction, allocating less than one parking space per new apartment built in the city. For the first time in Israel, apartments will be built according to the municipal policy with no parking spots. This reform is the first in a series of measures that are expected to be taken in the coming years to limit the use of private vehicles in major cities.

The climate crisis that finally managed to get on the public agenda, together with the severe infrastructure shortage and the huge traffic jams in the center of the country, as well as the general overcrowding of the city centers, created a negative discourse about the continued use of private vehicles. This is not yet reflected in the new car purchase data, which are still high, but it is expected that more and more authorities – mainly in the center of the country – will follow the Tel Aviv Municipality and try to reduce the use of private vehicles by reducing parking spaces, and other introducing mechanisms to remove the private vehicle from the streets.

In conclusion, after two years of lawlessness in the housing sector, it looks like 5782 will be full of fresh initiatives designed to bring down prices, close gaps in the building process, and bring a sense of order to the current chaos raging through the real estate market. Hopefully, these reforms will be implemented gradually, allowing the market to adjust to the new rules, as enforcing many well-intentioned changes simultaneously can ultimately result in more confusion and dysfunction than before. 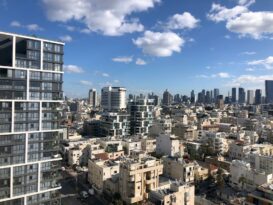