According to recently drawn up regulations, in order to hand over a new apartment from a contractor to a buyer, electricity and water connections must be approved by local authorities and an occupancy permit should be granted. At the time of the transfer, both the contractor and the buyer, or their representatives, must be present in the apartment, although it is possible to change this with the agreement of both parties. Until this time, no legislation or formal guidelines existed for these proceedings.

Last week, Minister of Housing and Construction, Yaakov Litzman, signed new regulations determining the official conditions for completing the construction of a new home in Israel and transferring ownership to the buyer. This is the first time that such criteria have been established within the framework of Israeli law, which until now, stipulated only that a registered engineer must confirm that the construction of the apartment has been completed – but did not elaborate further. The regulations will come into effect in about a month.

The new regulations for Israel real estate include three conditions, and only when all of them have been fulfilled can a new apartment be considered complete and ready for transferral to the buyer:

While all three conditions are already customary in the handover protocol for new apartments, up until this point, there were no legal requirements. Ministry of Housing officials explained that the new regulations were enacted due to a high volume of complaints from buyers who received apartments without water or electricity hookups. From now on, contractors will no longer be able to transfer a new apartment to a buyer without first meeting all of these conditions.

However, the regulations grant the parties the right to form a new agreement regarding the way in which the new apartment is transferred, depending on the specific circumstances of those involved. For example, if the buyer does not live in Israel, the buyer can appear live on Zoom when the keys are handed over from the contractor to their attorney or sent via mail. Whatever the terms, they must be pre agreed upon by both parties in an official contract.

It is important to note that these new regulations only apply when transferring a brand new home in Israel from a contractor to a buyer, they do not apply to a second-hand sale.

“The new regulations guarantee a degree of certainty in the procedures of completing construction and handing over a new apartment to the buyer that were seriously lacking until now,” explained Yair Pines, Director General of the Ministry of Housing and Construction. “Regulations establish new market practices, which were not mentioned in legislation up until this point. Beyond granting both parties certainty in this process, the new regulations are especially important for the minority of cases when the transfer of the apartment becomes a cause for legal conflict.” 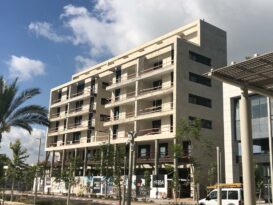