With volatile stock markets, growing anti-Semitism, increasing economic and political uncertainty, and reduced taxation on investors, many people are turning to Israel real estate for investment opportunities. Buyitinisrael receives messages from buyers and investors around the world looking for “something around a million shekels”. So, we decided to investigate real estate prices across the country and address a commonly asked question: “Where can I buy an apartment in Israel for a million shekels?”

Despite the high cost of housing, it is possible to buy an apartment in Israel for a million shekels or less in most cities, including the most desired city of Jerusalem, as well as some parts of the expensive Gush Dan region. In Haifa and Be’er Sheva, you can even buy an apartment for three to four hundred thousand shekels.  Buyitinisrael went to ten cities to see what you could buy for a million shekels or less:

While Jerusalem is the capital, and one of the most expensive cities in Israel, the range of real estate prices in the city is vast.  This is largely due to the fact that the eastern part, which moved to Israeli sovereignty only after the Six-Day War in 1967, is considered to be less valuable than the Western section.

Indeed, in three eastern-Jerusalem neighborhoods, Neve Ya’akov, Pisgat Zeev and Gila, deals have been closed, in recent months, with the sale of two-room apartments, of approximately 50 square meters, at prices between 910,000 to 980,000 shekels. However, buyers in these areas must bear in mind that the residences in these neighborhoods are adjacent to  Palestinian neighborhoods and villages. Accordingly, although the level of security is relatively high, this location will not suit everybody.

In the Hadar Elyon and French Carmel neighborhoods, a range of 3-room apartments is available at prices between nine hundred thousand to a million shekels.

The southern city of Be’er Sheva, also known as the “Capital of the Negev”, is considered a traditional destination for Israel real estate investors, and is the only one out of four metropolitan cities in Israel where 4-room apartments, and even some 5-room apartments, are available for less than a million shekels.

In the Ramot neighborhood, in the north of the city, three-room apartments can be purchased in new buildings for about 900,000 shekels.

Netanya is one of the largest cities in Israel. Well known for its long stretch of coast that attracts thousands of tourists every summer, the city is a popular destination among Jews from all over the world who wish to buy an apartment in Israel.

The supply of apartments for less than 1 million shekels can be found mainly in projects in the south of the city, built during the 1950’s and 1960’s. In the Ramat Yadin neighborhood (also known as the Dora neighborhood), the average price of a 2-room apartment of 35 to 50 square meters is 800,000 shekels, while 3-room apartments of 50-60 square meters sell for 850,000 shekels to a million shekels.

Petah Tiqwa is one of Israel’s largest and most central cities. Unlike most of its neighbors in the expensive  Gush Dan area, there are still transactions under the million-shekel threshold, although few and far between.

In the city center, a number of transactions have been signed in recent months with 2-room apartments of approximately 40 square meters, at a price between 900,000 to 1.1 million shekels. In the old Joseftal neighborhood in the east of the city, the price of three-room apartments is 800,000 to 900,000 shekels.

Beit Shemesh is one of the cities that has grown at the largest rate in recent years, with massive construction continuing these days. The city has become a sought-after destination for an ultra-Orthodox population, a large proportion of which are from English-speaking countries, which has resulted in significant price increases. Today, 2 and 3-room apartments can still be found in the old city center area, at prices between 800,000 shekels and a million shekels.

Ashdod, located in the southern coastal strip of Israel, has undergone significant change in the past twenty years.  What was once a relatively cheap peripheral city has now become a middle-class city, and prices have been adjusted accordingly. At the same time, it still has a relatively cheap supply of apartments in its old neighborhoods.

In the ultra-Orthodox Third District in the east of the city, there is a supply of two-bedroom apartments for 900,000 shekels to 1 million shekels, as is the case in Districts 6 and H.

In a city located in the Jezreel Valley in the north of the country, a large number of new apartments are offered for less than shekels 1 million.

In the southern resort city of Eilat, apartment prices are relatively cheap and there is strong demand for rental apartments, especially from employees of the city’s extensive tourism industry, and students. Some short-term apartments are also rented for tourists visiting the city.

Despite its location in the far northern periphery of Israel, Nahariya is considered a quality city, and the hometown of some of Israel’s richest families, including food manufacturers Strauss, and Zuglubeck, as well as the Wertheimer family. Because of its remote location in the north of Israel’s coastline, not far from the Lebanese border, the prices of apartments are relatively low and can be found in a wide range of 4-room apartments, including new apartments that can be found for up to 1 million shekels. 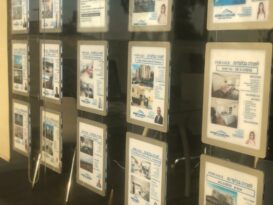 Market News Investment levels at record highs: Who is investing in real estate in Israel?